So called Vancouver BC has in its most recent years been a place of
relative social peace – anarchist intervention in local politics has
been pushed into the shadows. After decades of insurrectionary agitation
and action, things slowed down – folks left, faced repression, struggled
with the daily onslaught of capitalism, or for their owns reasons took a
step back. Yet in the shadows is where we thrive, and more recently
anarchist action and analysis has been occurring on a semi-public stage
in so called Vancouver.

One such initiative is Rent Strike Vancouver (rentstrikevan.ca), it is a
decentralized effort to provide those interested in striking resources
while agitating the fires of class war. It emerges as a result of
COVID-19, a symptom of the intersecting and inseparable crises of
capitalism, civilization, colonialism.

Agitating for a rent strike is fraught with tension. A rent strike’s
strength comes from its numbers along with the organization and
militancy of its strikers – as such accessible messaging is needed to
build mass participation, while radical messaging is necessary to grow
and inspire action. Remembering the need for a diversity of tactics and
voices lead to the establishment of Rent Strike Vancouver, which stands
in contrast to the more reformist efforts of the Vancouver Tenants’
Union. Despite this realization we find ourselves still walking a fine
line, and struggling to decide if we should participate in the politics
of producing respectable speech. Recognizing our local context, and the
lack of visible anarchist scene we have hung our heads and chosen to
participate, watching our mouths.  Participating in activism feels like
it forces us to obscure our most insurgent dreams and it is exhausting.
Nonetheless we find ourselves unable to pay our rent, or wanting to
experiment with not paying and as such participation seems necessary.
Capitalists not only force us to go to work, but it seems they are
endlessly capable of constraining our desires.

Another tension emerges around the idea of risk and identity. Rent
strikes by there very nature confront capital and the colonial project –
therefore they pose significant risk to their participants.
Simultaneously, the politics of risk have lead many to discredit them.
Many activists demand a strike not put anyone at risk, particularly
those most vulnerable. While we agree this is a noble intention, our
lives are always at risk – its avoidance is both impossible and would
constrain any desire for militant struggle. Of course different people,
have very legitimate reasons to have different thresholds of acceptable
risk. So we want to be explicit when we say that we cannot guarantee
anyone’s safety and anyone else who promises to do so is lying. With
this in mind those who feel angry enough or “safe” enough should join us
and withhold rent April 1st.

Through striking we hope to further actualize the desires shared in
whispers between friends, the screams splattered on the city’s walls and
the hate for this system imprinted into our hearts. Solidarity with all
rent striking. Solidarity with all striking blows against the crises of
capitalism, colonialism and civilization. Solidarity with those living
on the streets unable to withhold rent, yet resisting with every breath.

For a growing revolt and realization of desire 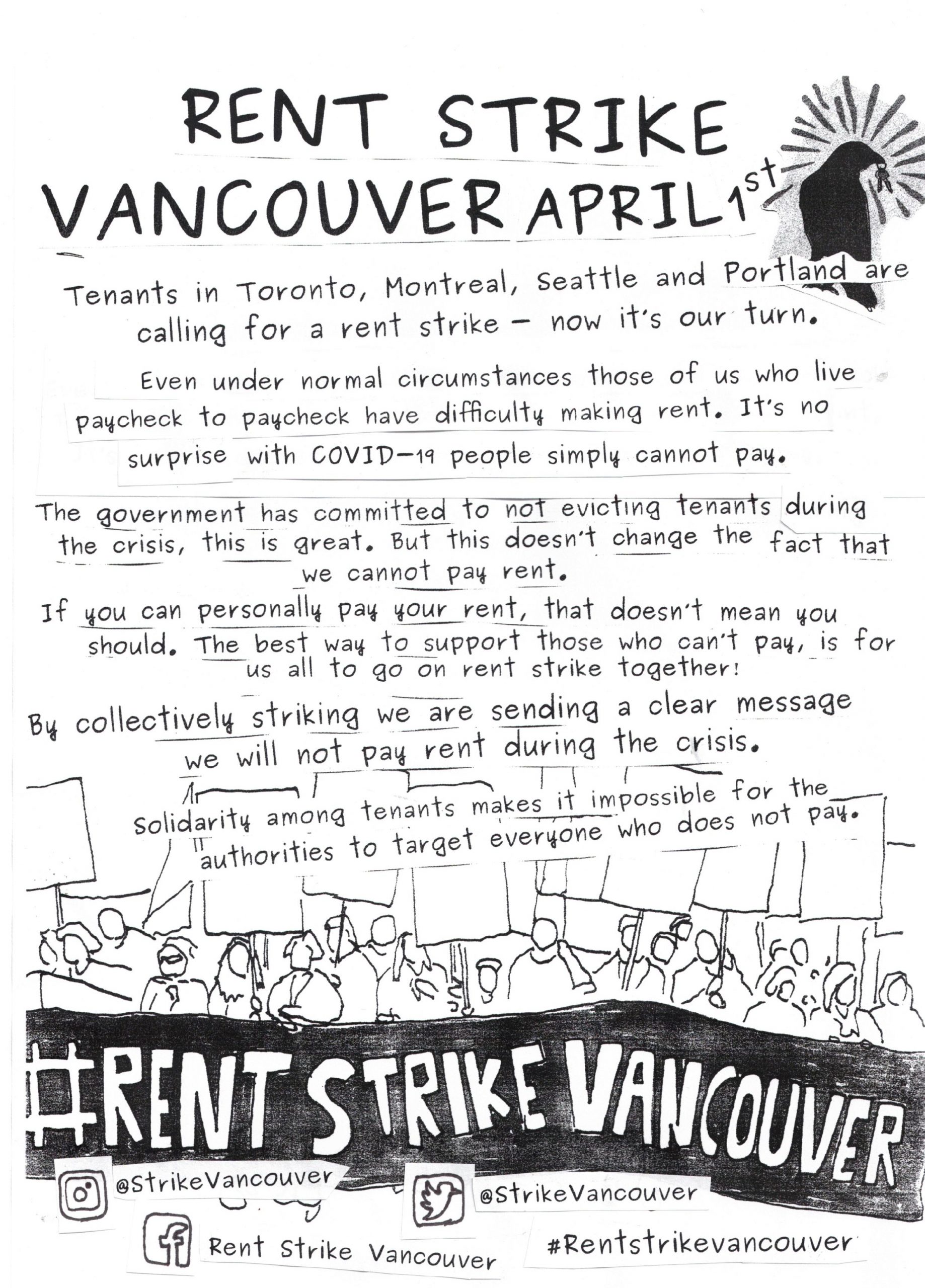